For the last five years, Joe Padilla, a Marine veteran, has been helping IBEW Local 53 with an annual toy drive for Toys for Tots. The Toys for Tots program is seeing a record amount of demand this year. The number of children in need this year has gone up by an estimated 40%, which means an estimated 56,000 toys are needed for kids.

Joe Padilla, a retired member of both IBEW Local 53 and the Boilermakers, is the sort of person who’s been working to give back to those in his community his entire life. He knows what it’s like to be on the other side of the donation and what it feels like when there aren’t programs here to help. Joe came from a larger family that had very little. His father worked a series of jobs, including time spent washing dishes at the Muehlebach Hotel and time at a brick factory in town.

Joe is ninety years old now, having been born in 1931. He joined the Boilermakers in 1951 before joining the service with the Marines. In 1960, he became an electrical worker and transitioned back and forth between the two whenever work got slow as needed. He eventually retired at the age of 62, in 1993. The Toys for Tots program and collection at the union hall has been a particularly big part of his life in his retirement.

“I’ve been collecting toys for about five years, I am glad to do it,” said Padilla. “When I was a kid I didn’t have toys. Merry Christmas was just another day. I had no toys at all growing up. That’s why I did it. These kids don’t have anything. I want to help them out. I know how bad it hurts when you see all your friends with toys and you have nothing, that’s the reason I do all of this.”

Mark Padilla, Joe’s son, says that his father never had new shoes or the like, frequently relying on used items to get by. Mark says that experience made Joe the man he is today, known by all around him for giving back. He has also received plaques recognizing him as the neighbor of the year in his community.

Mark says that, “He’s always been involved in his community. When I would come to visit him people would come out of the woodwork to say that he helped everyone in his neighborhood. He is 90 now and he was still digging his neighbors in the neighborhood out of the snow this last winter. He will always be Mr. Volunteer.”

Joe is a staple of his community and a proud part of his union. Joe certainly makes IBEW Local 53 proud. 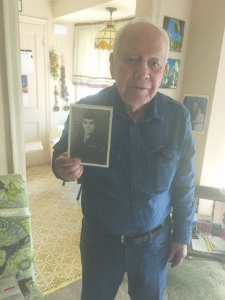