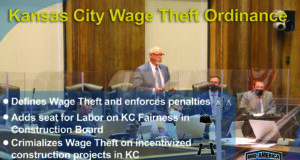 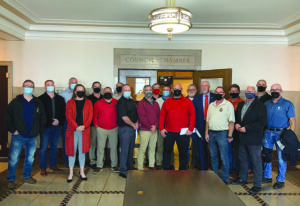 Another success in our ongoing fight against wage theft! Recently, Kansas City, Mo city council passed its first ever Wage Theft ordinance to hold cheating contractors accountable. Members of organized labor joined Councilman Kevin O’Neill after  the first ever Wage Theft ordinance was passed\. The ordinance will criminalize those contractors who use labor brokers, 1099s, pay cash without certified payrolls and other forms of illegal payments to workers. The new Civil Rights and Equal Opportunity Department will enforce prevailing wage, wage theft and city tax evaders by monitoring all worksites that are either contracted with the city or have city incentives tied to their project. In addition, changes were made to the Fairness in Construction Board which will include four new members. The board will include a member from organized labor, one from the Associated General Contractors and two from the community.