In a strong sign of things to come, newly-elected Mayor Tyrone Garner toured the controversially-closed Fire Station 15 alongside members of IAFF Local 64, UAW Local 31, two Unified Government Commissioners, Labor Liaison Judy Ancel, and a representative from management of the Kansas City Kansas Fire Department. Mayor Garner has promised IAFF Local 64 that the station would be reopened, the only question now is how and what that looks like. In many ways, reopening this fire station is an early sign that Mayor Garner is serious about working with unions to protect workers.

Fire Station 15 is located in the heavily-industrial Fairfax District of Kansas City, Kansas that contains many operations that employ workers from a surprising range of unions, including the IBEW, Teamsters, Pipefitters, UAW, and others. The closure became a workplace and public safety issue that affects a wide range of workers in the area, unionized and otherwise. The Fire Station 15 issue became a factor that led to the Tri-County AFL-CIO supporting now-Mayor Tyrone Garner over then-Mayor Alvey, amongst other issues.

“Everyone working down here deserves proper response times and the guarantee of safety. I am glad that this conversation is happening now,” said Chris Wing of IAFF Local 64. Wing is correct regarding the times established by the National Fire Protection Association, so re-opening Fire Station 15 would be a strong sign that Mayor Garner is working alongside the organized labor community in Kansas City to protect workers. IAFF Local 64 is delighted to hear that the station will be reopened because it will allow them to better perform their brave service to our community.

“I’m grateful that we’ve come together to discuss this and have a conversation with all the players. We have the mayor here now listening to what we are saying,” said Clarence Brown, the President of UAW Local 31. “We’d been given the opportunity to determine if this place should be open and the answer is it should be open! We are talking about saving lives at UAW Local 31 and in the community and I am glad that we are doing the right thing.”

“From a safety perspective, a resolution to this issue greatly benefits the community as a whole; whether it be worker, ratepayer, or passerby. I am pleased to hear that answers are on the horizon and we can move forward to best serve Fairfax and the surrounding areas. We, as labor leaders, have had our vision on reversing this closure since the decision was made and remain hopeful nobody is seriously injured as we work towards both temporary and permanent fixes,” said Tri-County AFL-CIO President Mike Kane.

Clarence Brown and Mike Kane, President of the Tri-County AFL-CIO and Political Director for Laborers Local 1290, both advocated to reopen the station to provide safe working conditions in the Fairfax District. Mike Kane has spent decades working to insure workers can do their jobs in safe conditions. Newly appointed Unified Government Labor Liaison Judy Ancel is also working alongside Mayor Garner to reach a settlement for the union.

IAFF Local 64 plans to have a plan ready to reopen the station in the next thirty days. The city
believes that the station would ideally be staffed with five firefighters and two apparatus to
properly respond to the needs of the area because it is considered to be high risk. The actual
placement of the station is considered less than ideal by the National Fire Protection
Association because it does not allow firefighters to be deployed in four directions. The price tag
for reopening Fire Station 15 is still unknown for both management and the union, but the union
argues that regardless of the cost, the department will save money on overtime costs by
properly staffing the department. The Kansas City Kansas Fire Department is currently
operating at depleted staffing levels. 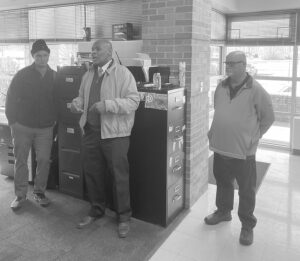