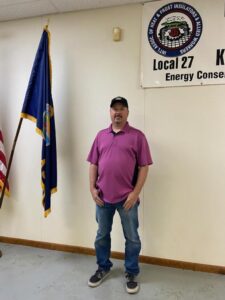 What is your personal and family history with Local 27, the Insulators, or other unions?
I’m a third generation insulator following my father (Chuck Jr), my uncle (Jerry) and my Grandfather (Charlie). I’ve grown up around the Union and it’s members my whole life. Jack Miller (ex-Business Manager) played Santa when I was a kid. Bought my first truck from Garry Kemp (Ex Business Manager of Local 27 and the Greater Kansas City Building & Construction Trades).

What do you plan to do as leader of Local 27?
I have seen our local dwindle in numbers and hope to rebuild those numbers. I would like to see more communication within our local and with our contractors. Build better relationships with other unions and elected officials in the Greater KC area.

What are your opinions on solidarity among workers?
Having been raised around Unions and Union members, I believe strongly in supporting all unions and their members in any way possible. We must stand together or be torn apart.

Is there anything additional you would like to say?
I would like to thank my members and officers of the many Unions and Building Trades for their support as I venture out into this new chapter of my life.