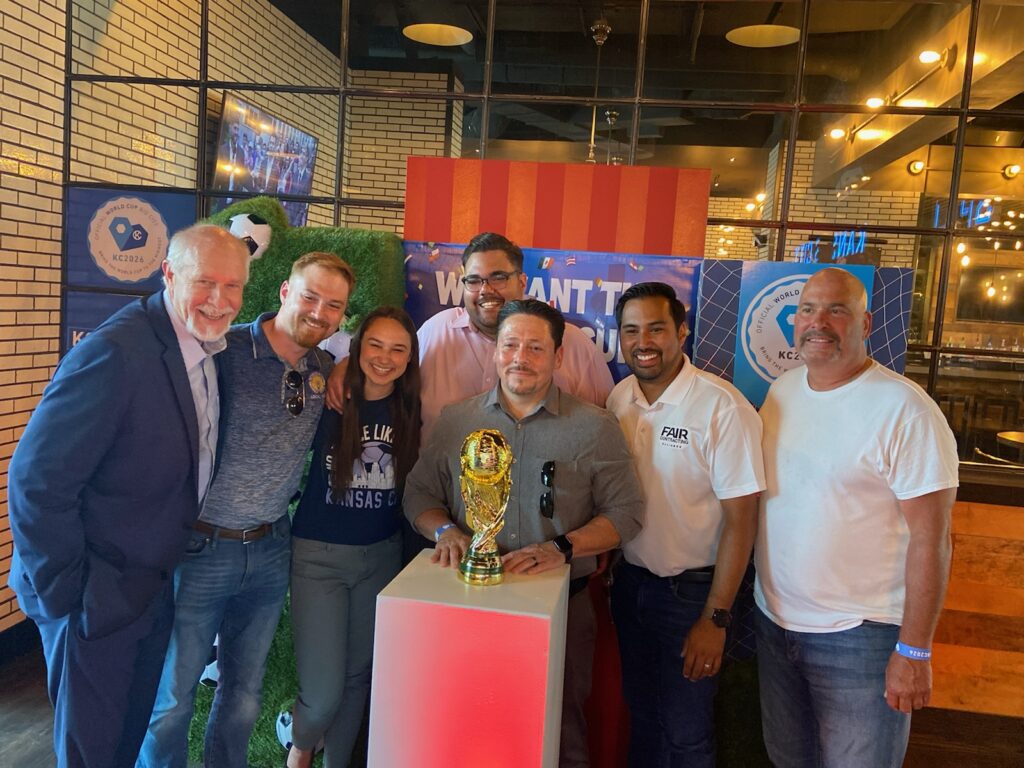 Area unions and worker organizations join soccer fans in celebrating our selection as a host city for the 2026 FIFA World Cup. The World Cup will showcase Kansas City as a world-class city. In addition to the excitement around the games themselves, unions are celebrating the jobs and economic activities that will come with hosting this major event.

Efforts among area sports leaders and elected officials have paid off, but now it is time for the city to roll up their sleeves. The city has four years to prepare for the largest sporting event in the world and the biggest sporting event ever to be held in Kansas City. It will require massive resources and includes $50 million of improvements to Arrowhead Stadium, where the games will take place, along with improvements to public transit, which will change the future of the region.
Kathy Nelson of the Kansas City Sporting Commission said hosting the World Cup will have a positive financial impact on the city and lift up the entire region.
“When we have tens of thousands of fans in our city, when you think about the hoteliers, the housekeepers that will be needed, the transportation people, all of that matters,” Nelson told KCUR’s. “It matters that we’re employing people. It matters that we’re leaving a positive financial gain.”

Kansas City Mayor Lucas said the World Cup will bring direct economic and financial benefits to the city. He believes hosting the games will also bring long-lasting benefits beyond 2026. Lucas said that as Kansas City builds up over the next four years, it will be important to ensure that residents can still access and rely on basic city services.

Missouri lawmakers say legislation they passed made it possible for Missourians to see the World cup. It was Senate Minority Leader John Rizzo’s (D-Independence legislation, Senate Bill 652, that helped Kansas City score by exempting the sales tax of tickets. In anticipation of the 2026 announcement, the Missouri legislature passed the bill this year exempting ticket sales taxes. The bill is currently on the governor’s desk waiting for his signature, but Parson said he will be signing it soon.

Mayor Lucas has stated he is not concerned about missing out on the local sales tax, because much of the revenue generated from the games will come from outside the arena. The sales taxes from actual purchases at the facility itself, hotel taxes generated, and other economic activity taxes will be captured throughout the festivities.

The AFL-CIO, US’s largest federation of labor unions is leading a coalition demanding FIFA address concerns around human and labor rights at the 2026 World Cup in the US, Canada and Mexico, and commit to minimum standards on these issues.
The 2022 tournament in Qatar, scheduled for this fall, has already been scarred with human rights and labor violations, including the deaths of thousands of migrant workers who were brought into the country to build stadiums and infrastructure for the event; evidence of forced labor, reports of withheld wages; exorbitant recruitment fees charged to workers; and paltry pay.

The AFL-CIO and several other labor and human rights groups wrote a letter to FIFA demanding minimum labor standards for planning and execution of the 2026 World Cup, and that FIFA meet with the groups to address commitments FIFA should make to meet human rights guarantees. FIFA wrote back, dismissing concerns about the governing body’s human rights policies and implementation of them.

The U.S. cities have submitted their human rights plans. These plans were required by FIFA and detailed how each city would minimize negative impacts and maximize opportunities from the games, including by protecting workers and human rights.

We call on FIFA and our elected officials to commit to minimum labor and human rights standards which include:

By applying minimum labor and human rights standards, FIFA and our communities can set an example on the world stage that it is committed to protecting workers.