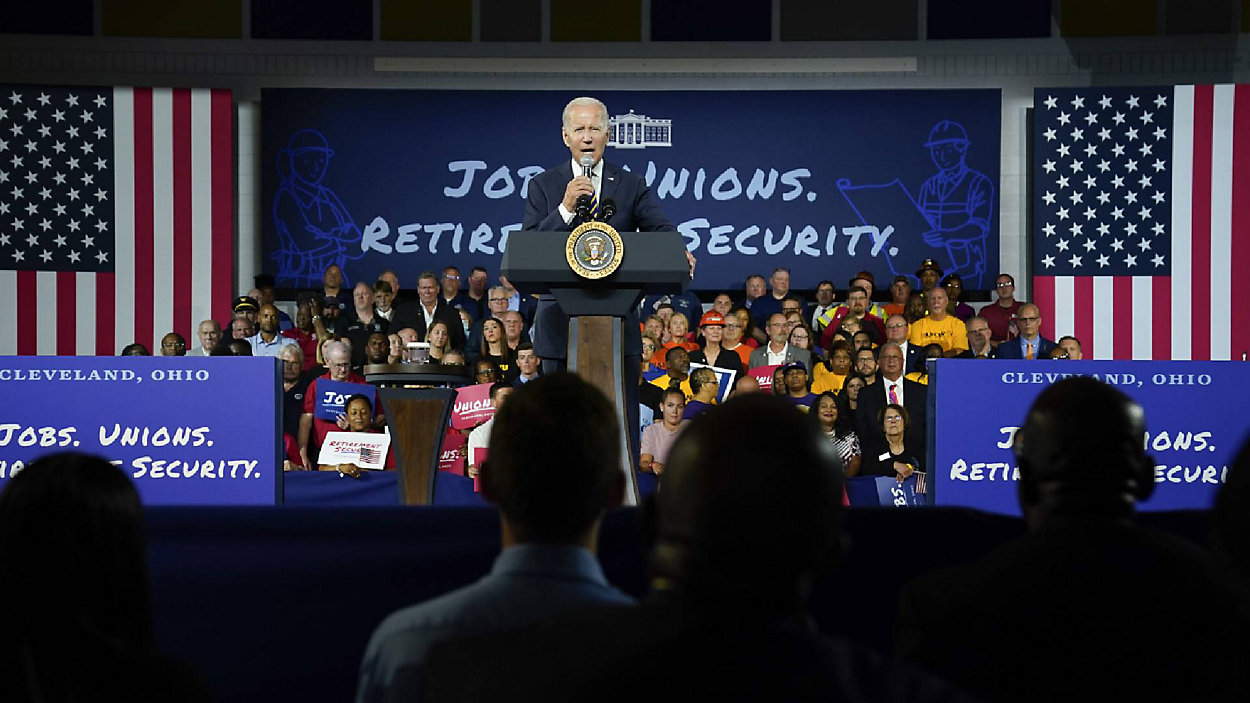 The Biden Administration has announced a final rule for a program intended to keep 200 Multi-Employer Pension Funds solvent for the next 30 years and protect more than two million Workers from having their retirement benefits reduced. The rule announced by the Federal Pension Benefit Guaranty Corporation modifies the interim rule from last July that set up the Special Financial Assistance Program for financially troubled pension funds. The program, authorized by the American Rescue Act of 2021, will provide an estimated $74 billion to $91 billion in aid to enable eligible funds “to pay retirement benefits without reduction for many years into the future,” the PBGC says.
President Joe Biden joined union workers and retirees to announce the final rule implementing the American Rescue Plan’s Special Financial Assistance program. Before the American Rescue Plan, workers and retirees participating in more than 200 multiemployer pension plans faced the prospect of not receiving the full benefits they earned to support them and their families in retirement.

“People around the country wake up every day wondering whether they’re saved enough to provide for themselves and their families before they’ve stopped working,” Biden told union workers and retirees. “But the reality is, for so many people, the goalposts keep moving. With today’s actions, millions of workers will have the dignified retirement they earned and they deserve.”

North America’s Building Trades Unions President Sean McGarvey called the program “the most significant effort to protect the solvency of the multi-employer system in nearly 50 years.”

The announcement from the Biden Administration will ensure they continue to build on the progress so this program can serve even more struggling pensions, help all plans by getting the entire multiemployer pension system on stronger footing, and protect even more workers from having their hard earned benefits cut. The White House fact sheet on the final rule issued includes the following highlights of the plan’s historic impacts:

Protect benefits for millions of workers who faced cuts.
Before: A wave of multiemployer pension plan insolvencies was projected to leave two to three million union workers, retirees, and their families without the full benefits they had earned.
After: Two to three million workers and retirees in plans that receive assistance are expected to have their full pension benefits for the next three decades.

Harsh pension cuts reversed for over 80,000 workers and retirees in 18 multiemployer plans.
Before: MPRA allowed plans to, for the first time, cut workers’ and retirees’ benefits in order to remain indefinitely solvent. Eighteen multiemployer “MPRA plans” were approved to utilize this program.
After: More than 80,000 workers and retirees in MPRA plans who, through no fault of their own, had their pension benefits cut, are eligible to have those benefits fully reinstated – with their plans solvent through 2051. The Special Financial Assistance program ensures all MPRA plans that were forced to cut benefits are able to restore those cuts in full, maintain full benefits into the foreseeable future, and be projected to remain indefinitely solvent.

Most significant effort to protect the solvency of the multiemployer pension system in almost 50 years.
Before: Before the American Rescue Plan, because of the anticipated financial pressures from the need to guarantee minimum (partial) benefits for insolvent plans, PBGC’s Multiemployer Pension Insurance Program was projected to become insolvent in 2026.
After: The American Rescue Plan’s Special Financial Assistance program extended the solvency of the PBGC multiemployer insurance program from 2026 to 2055. This relief is the most substantial policy to strengthen the solvency of our nation’s multiemployer pensions since the enactment of the Employee Retirement Income Security Act (ERISA) in 1974.

With the support of the Biden Administration, millions of retirees, members, and beneficiaries can breathe a sigh of relief, knowing that they will still receive their full pensions and be able to retire in dignity after a lifetime of hard work.