Alise Martiny, Business Manager of the Greater Kansas City Building and Trades, joined Slacker of 101 The Fox to talk with the MVP of the week. The award was presented to Teamsters Local 41, with specific honor given to Roy Nixon. Roy who is a Business Agent and Organizer with Teamsters 41 as well as an active member of his community. Teamsters Local 41 President Ralph Stubbs and Secretary-Treasurer Jon Flinn joined Roy for the segment with Slacker and Alise, who noted that, “Without the Teamsters, we would have never made it through the pandemic.” Teamsters are the people who made sure we had supplies in all our stores, be they employees at warehouses or drivers.” Slacker, whose grandfather was a Teamster, emphasized that this week in particular was important to him. “If it came to you, it came through the Teamsters… Be proud. Be strong. Be union.” It’s easy to forget about the amount of labor that went into every shipment and purchase we make, but union workers are the bridge that makes that happen. We couldn’t be where we are today without union workers building and supporting this country.” Roy, who has been a Teamster for 42 years, is involved in numerous charities, all relevant to the members of the Local. He has even been honored recently by City Councilwoman Ryana Parks-Shaw for his work. Roy, who just needed a job all those years ago, joined the Teamsters thanks to another member bringing him in. He never looked back. “Whatever you decide to do, a union can help you do it.” Roy fishes and hangs out with his grandkids whenever he can, but what he really loves to do is volunteer his time to help those in need. Slacker mentioned the recent “Take a Kid Fishing” event that was hosted with significant union and Teamster support. If interested in nominating the next MVP, go to beyounion.com. 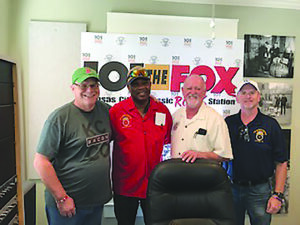