Alise Martiny, Business Manager of the Greater Kansas City Building and Trades, joined Slacker of 101 The Fox to spotlight MVP’s KCK Commissioner Mike Kane and KCMO Councilman Eric Bunch.   If you would like to listen to the live radio segment,  click on the link at the end of the story. 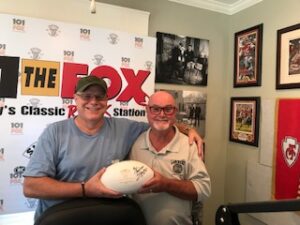 Alise and Slacker featured Kansas City, Kansas Commissioner and President of the Tri-County AFL-CIO, Mike Kane. Mike Kane was presented with an MVP Game Ball for his work in the community and for labor. He has been a staple of the organized labor community for years. Mike is a retired member of the UAW, where he worked at General Motors, and is the full-time Political Director for Laborers Local Union 1290. Mike is also a Commissioner for the Unified Government of KC-Wyandotte. Both Tri-County Labor and Laborers #1290 are affiliates of the Kansas AFL-CIO. Mike Kane’s primary focus in his work for labor has been and continues to be safety for workers. Kane, one of ten kids, grew up in an all-union, machinists household. He joined General Motors in 1976 where he worked on the line and was elected as a committee person, a job he held for 9 years. Of his 35 years spent at the UAW, 28 of them were spent as a union representative. He had the opportunity to serve as an Appointed Representative to the International on three separate occasions, serving on Alternate Health & Safety, Health & Safety, and Ergonomics. He has since worked at Laborers 1290 for the last 10 years. Mike says that the trades present a wonderful opportunity to make a good living without college debt and may represent a good alternative to college for some. Kane, who met his wife, Diane, in kindergarten 43 years ago, is an “Original Dotte”, meaning he is from, and has spent his life in, Wyandotte County, Kansas. He loves to hunt, fish, and spend time with his sizable family, made up of 83 people. Kane has served as the District 5 representative to the Unified Government Board of Commissioners since 2005 and was appointed to the Kansas Human Rights Commission by Governor Sam Brownback. Mike Kane is currently up for re-election in his role and deserves strong labor support. 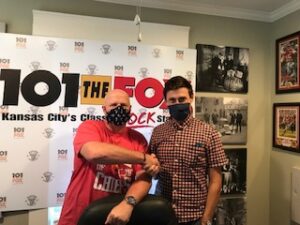 Alise Martiny, Business Manager of the Greater Kansas City Building and Trades, joined Slacker of 101 The Fox to talk with Kansas City, Missouri Councilman Eric Bunch, who holds the in-district 4th District seat. Councilman Bunch was presented with the MVP Game Ball for his work in the community. “Eric is a great person who has done a really great job of understanding labor and helping labor and has brought a lot of the projects we are working on to the city thanks to his leadership in the Council,” said Business Manager Martiny of Councilman Bunch who responded with gratitude.“Thank you for the kind words, I am flattered by this award and am excited to be here.You know, everyone who gets into politics says “oh I’m not a politician” when they get started, but they are. Local elected officials are politicians. But I like to believe that some of us are different.” Eric says that local government is really where the biggest change, specifically the biggest tangible change can occur. The things that happen at City Hall are the things that you see when you walk out your front door, be it your sidewalks or roads or where your kids have to play. Bunch says that projects like the streetcar and the new airport are great examples of that mindset, both of which are jobs that have resulted in a massive number of union jobs. City Council was a place where Bunch felt like he could make an impact in his local community. Slacker credited Bunch with making large improvements regarding the safety of cyclists and pedestrians in town, giving people safe ways to get around the city without the use of a car. Eric got his start doing advocacy and policy work regarding the built environment by doing things like successfully advocating for bike trails and better sidewalks before he ran for Council. Bunch gave credit to new City Manager Brian Platt for his work and similar interests and investing in all types of transit serves to make the city more accessible to everyone and has been proven to reduce the amount of traffic for people who do drive. Kansas City’s public transit system is now free, thanks to the support of the current City Council, which has made the system run quicker and receive better ridership, resulting in other cities across America attempting to copy us. All the money that would have gone into bus fares is now staying in the pockets of hardworking Kansas Citians and going back into our local economy, providing more jobs. Bunch says that extra money could be the difference between a low-income family paying for dinner or making it work and the city would rather they not have to choose. It makes our city more accessible to people and shows that Kansas City is growing and forward thinking. Alise Martiny also gave credit to Eric’s wife, Kaitlyn, for her role in sharing the parenting responsibilities of their five year old twin girls and eight year old boy.

If you would like to submit a nomination for the next MVP, please visit: beyounion.com.