Meet Judy Ancel, fierce advocate of unions and workers rights. We were fortunate to have Judy share some insight with the Labor Beacon in our spotlight feature this issue. Her impressive story is inspiring to all who are advocates of working people. 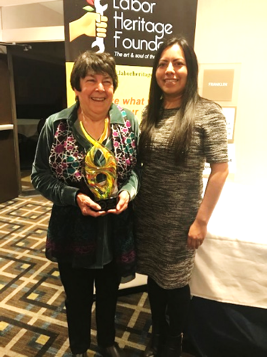 • Current position, job history, positions held
For 29 years I directed the labor education program at UMKC providing classes for unions, for members of the community and for UMKC students.

In all of them I led people to discover their heritage as members of the working class, their rights, and the power of solidarity. Today I am retired, but I’m still teaching and writing for publication in labor journals. I recently completed a curriculum for the American Postal Workers Union called Eight Lessons from Labor History They Never Taught You in School.

I do bargaining Training for CWA in DC, and I advise people who are thinking about organizing. I learned about labor first as an adjunct professor in community colleges in California, then as an organizer for the AFT. After that I learned blue collar organizing working in a non-union electronics plant in Silicon Valley and graduated to a unionized plant in Kansas City, Kansas where I became an activist and shop steward in the United Steelworkers.

With that checkered background of trouble-making, I jumped at the opportunity in 1988 to take over the Institute for Labor Studies where I landed for the rest of my paid career. It was my dream job to teach people the art of effective trouble making. Of course UMKC wasn’t too thrilled and we had many struggles to save the program. The biggest was in 2011 when labor education in KC and St. Louis got “Breitbarted” by the Tea Party and only an effective fightback program by supporters from around the world and our students saved us.

The program was finally destroyed by UMKC in 2017 during budget cuts when an unethical Dean destroyed it in the middle of the Right to Work fight. So I retired. Today I still am coordinator of Kansas City labor’s radio show The Heartland Labor Forum on KKFI, KC Community radio. HLF has never failed to attract new volunteers and currently has a mixture of retired, young and middle aged workers, most of whom are union members.

• How did you become interested in labor, organizing, activism?
It’s in my blood. My grandfather was a union member in Eastern Europe. My uncle helped organize Steelworkers as a student in Chicago in the 1930s. I grew up during the Civil Rights movement, and went on my first demonstration at 15 for fair housing for blacks. In college, I chafed at all the special social rules just for women and got involved in tearing them down. I learned the power of activism. Then I worked to tear down all the barriers to employment for women.

I got a masters degree in history only to learn that the only jobs available were part time. So I jumped at the chance to join a union. That led me to become an organizer for the AFT in California. By then I’d caught the union bug and went to work in a non-union electronics plant in Silicon Valley so I could organize.

After moving to Kansas City I got a job in a factory and joined the United Steelworkers. For the first time I earned a decent wage and had benefits. I was elated. I became a shop steward. I worked days in a machine shop on a brand new NC machine.

An ambitious jerk named Dennis worked the night shift. Dennis thought that if he exceeded the quota they’d make him a supervisor, so he stopped cleaning out the machine at the end of his shift in order to get more production. One morning I’d had it and told him off. He went straight to management, which immediately fired me for “inciting a strike.” This was in about 1980, before Reagan’s NLRB, and I got my job back after a couple of weeks.

When I returned, Dennis was gone. He’d quit after my union brothers and sisters made sure he knew he was no longer welcome in that shop. That showed me the power of workers when the members truly understand that an injury to one is an injury to all.

• Vision for the future?
That’s part of my vision for the future, that workers relearn that lesson, because I think that too many union leaders and members have forgotten the power of solidarity. They’ve focused way too much on bargaining and winning material gains and too little on the fight for decent working conditions and building the relationships among us that help us win the little daily battles that make our work lives tolerable.

I deeply believe that union get stronger in fighting for things like the right to take a break or not work through lunch, or the right to have the proper safety equipment every day, or against speedups or excessive overtime while others are unemployed.

I’ve always believed that strong unions come from those kinds of fights, and they stay strong even between contracts. In the end I want a future where workers run the workplace without the interference or oppression of managers and supervisors.

The other part of my vision for the future is that our Kansas City unions act more like they did during the Right to Work fight when they understood that whether you have a union or not, whether you’re male or female, black, white or brown, we’re all in this together We are the working class.

After the Right to Work fight we returned to our default position that is not solidarity with all working people. I see it in the lack of a strong labor response to the Black Lives Matter movement. Such lack of solidarity will lead to our ultimate defeat because our small labor movement simply doesn’t have the power to fix what ails this society on its own. To do this will require taking risks, looking at new ways of organizing, and sharing leadership with others.

• Committees, organizations you participate in?
I don’t know when I had time to hold down full time jobs. I currently still produce The Heartland Labor Forum, write the news every week, handle the administrative tasks and do one or two shows a month. I’m also the Active Member chair at KKFI and on the board. I serve on the Leadership team of Kansas City Jobs with Justice and am the Organizing Committee co-chair with Sharon Al Uqdah of APWU.

Finally I am a founder and board president of The Cross Border Network, an international solidarity organization whose work focuses on Honduras and on immigrant rights. Our slogan is “We support workers across borders and workers who cross borders.” We just published a pamphlet called “When Fleeing is the Only Option” about why so many people are leaving Honduras for the U.S. You can read it at www.crossbordernetwork.org

• What motivates you?
Justice and the hope to change the world.

• Personal misc.
I have a grown daughter who lives in Seattle and is about to embark on a career as a family counselor.

Take the opportunity to listen to the Heartland Labor Forum, Kansas City’s only program about the workplace. Find out who is busting unions and who is fighting back. It is produced by and for working people and has been on the air since 1989. You can listen live at 90.1 FM every Thursday at 6pm or listen to the podcast at KKFI.org.