Raven Printing LLC is a family owned Union digital printing and mailing company located in North Kansas City MO at 1447 Gentry St. The company has experienced steady growth over the past few years by assisting dozens of unions and union members locally and nationally. They attribute a lot of their growth to their loyal union customers who have been especially generous in spreading the word about their company. And as a result, they have received numerous new referrals.

Owner Sean O’Donnell said, “We are very grateful for this opportunity and it all started with our good friends like Jeff Hayes at CWA Local 6360, all the good folks at UAW and our retired union pals like Bill Finkle and many others. Because of such great local support, last year Raven moved forward into the mailing business just in time for the political season. It was a banner year as we assisted a slew of local candidates running for all sorts of offices locally and statewide in both Missouri and Kansas.”

In addition to this, Raven was hired by a national campaign company out of Washington, D.C. to print and mail thousands of postcards, walk cards, and door hangers for their candidates in the midwest. In the month of October alone Raven produced and mailed just under 400,000 postcards. Raven has also received honors in excellence in the graphics from PIA Midamerica, receiving a number of awards in the last few years placing them into the top tier over hundreds of printers from a four state region. Raven is a proud member of CWA Local 6360. O’Donnell is familiar with union pride, his father was in the musicians union in Pennsylvania for over 70 years. 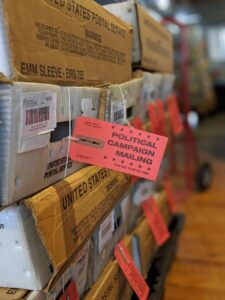 Raven Printing was hired by a national campaign company from Washington, D.C. to print and mail thousands of political pieces for candidates.