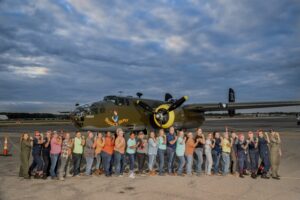 Local union women gathered together at the Charles Wheeler Downtown Airport in front of “Rosie’s Reply”, originally assembled in Fairfax, Kansas. They were joined by Rosie enthusiasts and celebrated the power of women in labor. An impressive sight, no doubt! Photo credit: Jeff Roberts / Bank of Labor

During the early 1940s, when the U.S. entered WWII, the country’s female labor force grew by 50 percent, according to a Metro State University report. By 1945, there were 19,170,000 women in the U.S. labor force, with nearly one out of every four married women working outside the home. Of course, not all of these women were union ‘Rosies’. But those who were – like Boilermaker Betty Reid Soskin – cracked open the door to future generations of North American women in the skilled trades. Since then, the ranks of women in trades have risen slowly but steadily enough that initiatives like Heartland Women in Trades (HWIT) formed to nurture that growth. When Alise Martiny, Secretary-Business Manager of Greater Kansas City Building and Construction Trades Council and first President of HWIT, joined the Kansas City Cement Masons’ Apprenticeship program in 1980, she was one of only two women in her class. Twenty-five years later, current President of HWIT and Master Pipefitter, Quiema Spencer, had several other women in her Pipefitter Local #533 Apprenticeship program. One was her colleague Serene Thomas, who went on to become an instructor in the Pipefitter Training Center and serve on the Pipefitters’ Finance Board. 2020 U.S. Bureau of Labor statistics show that while union membership among men decreased by 368,000, the number of women joining unions increased to 10.5 percent of total membership. There are now nearly seven million union women in the U.S. Kevin Gard, Business Manager with Cement Masons 518, has noticed an uptick in membership among women. “We’ve seen a big shift from 25 years ago,” said Gard. “These days, many of our region’s most promising future leaders are women.” Labor Local 264 named its first woman, Lacresha Kuykendall, to its Executive Board, according to the Local’s Business Manager, Reggie Thomas. Paula Winkler, one of the founders of HWIT and a colleague of Kuykendall and Thomas, began her apprenticeship with Labor Local 264 in 2002. She was raising a child with special needs so she was looking for a steady, living wage after working as a bartender and school bus driver. Early on,” Winkler said, “I experienced skepticism from a few men on job sites, but I focused on learning new skills and getting the job done, no matter how demanding the project was.” With nearly 20 years now under her belt, she hopes her hard work helps show young women that they can do anything when they set their mind to it. Lindsey Heath, an Apprentice Bricklayer with Local 15, is part of the younger generation entering the skilled trades. When she was furloughed from her restaurant job in 2019, her father, a union drywaller, urged her to check out the wages and opportunities in the skilled trades. She entered the Bricklayers’program in 2020. Don Hunt, Business Manager with Bricklayers Local 15, noted that the numbers of women entering the bricklaying program are still small. “But,” Hunt said, “women who do join our ranks work incredibly hard and have a great attitude.” For many young women, a trade apprenticeship program is not even on their radar when they are beginning to plan their futures. Sam Weber, who had been trying to make ends meet by working late hours as a bartender, had not given much thought to becoming a Pipefitters’ apprentice until she attended an HVAC program at Maple Woods. She knew little about unions while growing up but, when she heard about the benefits and job security available to Pipefitters, she applied for an apprenticeship and was accepted last year. Weber has also benefitted from the KCI Workforce Training program. Thanks to apprentices like them, and the female colleagues who preceded them, Rosie’s legacy will continue to thrive. As Thomas noted, “We’re going to be seeing more and more women in union leadership positions.” Martiny, now a 40 year veteran and a leading voice in the Skilled Trades, agreed. “The more mentors we have who look like us, the more of us you’ll see.”