AGAINST ALL ODDS, TEAMSTERS AND DEMOCRATS SAVE PENSIONS

They said it couldn’t be done. But they proved them wrong with the approval of a $1.9 trillion COVID-19 stimulus measure containing a provision bolstering financially-troubled multiemployer pension plans that will ensure the retirements of more than 1 million American retirees and protect workers.

The truth of the matter, the stars were aligned. Biden was elected President and Democrats took the two Senate seats in Georgia. The pension relief called the Butch Lewis Act was attached to the stimulus bill and didn’t need a filibuster-proof 60 votes. Unions and their Democratic allies fought for years to pass such a pension fix, but were blocked by Republican Senate Minority Leader Mitch McConnell when he was Senate majority leader. Had Trump been reelected and McConnell remained in control, millions of retirees would have seen their pensions waste away.

Imagine receiving a letter in the mail stating your pension was going to be cut 52 percent. It was 2015 when all 410,000 current and retired Teamsters in the Central States Pension Fund received that letter, informing them they would be spending their golden years broke after decades of hard work. At that time, Congress had just made it legal for a multi-employer pension fund in “critical status” to yank back retirees’ hard-earned income.

Central States wasn’t the only pension fund in trouble, and some funds actually did slash retirees’ pay, including Ironworkers Local 17 in Cleveland and the Western Pennsylvania and Upstate New York Teamster plans. But none of that should have been the retirees’ problem. They were owed those pensions, as negotiated compensation for work done long ago. Committees to Protect Pensions formed around the country. After the letters went out announcing the cuts, monthly meetings of the Kansas City Committee to Protect Pensions ballooned from 125 people to over 450.

First step, the Teamsters and retirees were able to stop the cuts at Central States, which covers 25 states and those impacted in our area. But the underlying problem was still looming—the fund was going to run out of money. Senator Bernie Sanders twice introduced the Keep Our Pension Promises Act, which would have gotten money to shore up the PBGC by closing tax loopholes for the rich, but Republicans blocked all efforts. Those opposing in the Senate, kept pushing for “shared sacrifice” stating that retirees should feel some of the pain. But hadn’t the union members already made their sacrifice after all of those years working to provide a pension for their family?

Teamsters International Vice President, John Murphy, dedicated the past ten years to fight to save Teamster pension plans for the retirees. Murphy pushed ahead in spite of the many cynics who told him it was impossible, he couldn’t get it done, and it would never happen. He stayed the course, fought for NO CUTS in retiree’s pensions, and won against all odds. Murphy worked night and day, met with retiree groups in Kansas City and across the county and organized the retirees into a fighting force that beat the hell out of congress for years to get this done. Murphy will finish his term as IBT VP next year, and the Teamsters will lose a great strategist, one of the hardest workers, and old school leader who believes members come first and that retirees deserve the dignity of getting what they worked so hard for all their lives, their pension. “Democrats realized something had to be done now,” Murphy said. “Republicans have never been willing to address the multiemployer pension crisis as a serious issue. They’ve been an obstacle rather than a facilitator. So, the Democrats have fulfilled one of their many promises to American workers and retirees.”

Under the new measure, money to assist eligible plans would come directly from the U.S. Treasury Department in the form of grants which would not need to be repaid. Plan participants would receive 100 percent of their earned pension benefits.

The National Institute for Retirement Security has concluded that the $44.2 billion in private pension benefit payments paid to retirees of multiemployer plans in 2018 supported $96.6 billion dollars in overall economic output in the national economy, and an estimated $14.7 billion in total tax revenue. The country can ill-afford a reduction in these revenue streams especially during the recovery period. 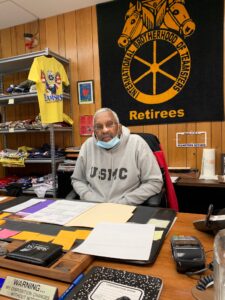 The retirees and those impacted can now rest, but the toll taken from the stress they faced these past years wondering what lied ahead for them cannot be dismissed. Don’t ever underestimate the power and the fight of union members in this country, without their effort and willingness to never back down and never give up they helped save their hard earned pensions. Congratulations to all who made the trips to Washington DC, made all the phone calls and wrote all the letters to their representatives, your victory can be claimed.