A WIN FOR WORKING FAMILIES AND ORGANIZED LABOR 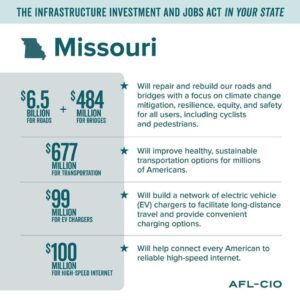 WHAT IT MEANS TO MISSOURI

Congress passed a $1.2 trillion bipartisan infrastructure bill, delivering a major win for working families. The final vote was 228-206. Thirteen Republicans voted with the majority of Democrats in support of the bill, while six Democrats voted against it. Delivering a major win for working families.  Following hours of delays and internal debating among Democrats, including calls from Biden to persuade skeptical progressive members of the Democratic caucus. The passage of the infrastructure bill is the largest appropriation of its kind since the Eisenhower Congress gave America its interstate highway system in the 1950s. The bill’s passage coincides with encouraging news on the economic and Covid-19 fronts: jobs report were better than expected and reports that the Delta variant may have peaked, The legislation will deliver $550 billion of new federal investments in America’s infrastructure over five years, including money for roads, bridges, mass transit, rail, airports, ports and waterways.

The package includes a $65 billion investment in improving the nation’s broadband infrastructure, and invests tens of billions of dollars in improving the electric grid and water systems. Another $7.5 billion would go to building a nationwide network of plug-in electric vehicle chargers, according to the bill text. The immediate impacts are going to be felt in the construction industry. Some reports estimate that it’s going to be 1 million jobs over a five-year time period. But beyond the direct sectors that are going to be impacted by the spending, there will also be indirect effects in other sectors such as supply chain and also service sectors. Investment in bridges and roads are going to make the U.S. more productive, which means it’s going to lower costs for producers. So as consumers, we should feel it in lower prices. There is a lot of investments that are long overdue, but there is also a focus on resiliency. After years of inaction, Democrats and Republicans came together to approve important legislation that will boost necessary transportation, electrical and water networks that will create good-paying jobs and bring the nation’s economy into the 21st century. Previously, elected officials have only talked about infrastructure investment but have done little about it.

“This bill will modernize essential transportation systems – all critical parts of America’s supply chain. Teamsters work each day in every part of this supply chain and know firsthand that our transportation infrastructure has been neglected for too long.” said Teamsters General President Jim Hoffa. The new infrastructure bill gives the federal government more authority over how transportation money will be spent across the country. Typically, transportation funds are allocated via a traditional formula to states based on their populations, gas-tax revenue and other factors. But this bill includes dozens of competitive grant programs—many of them new—in which the Transportation Department will pick recipients from applications by state and local governments. Without the 13 Republicans in the House who voted for it, it may not have passed. And in the Senate earlier, there were 19 Republicans that went for it. That is not overwhelming bipartisanship by any definition, but in these polarized times, it was enough for Biden to make his case that he made in the campaign – that Washington can come together and get things done for the American people.