U.S. Approval Of Labor Unions ‘At Highest Point Since 1965’ 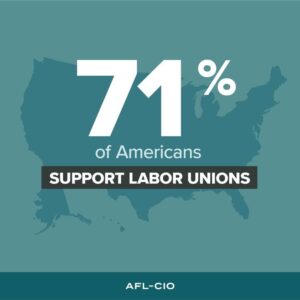 Seventy-one percent of Americans now approve of Labor Unions. The data comes from Gallup’s annual Work and Education survey.  That number ties the 1965 figure of 71% support.  The poll began in 1936 and recorded the highest support for Labor Unions in 1953 and 1957 surveys with a 75%  approval rating for unions.

The most recent rating comes amid a flurry of 2022 Union victories across the country, with highly visible successes at major companies such as Amazon and Starbucks.  The National Labor Relations Board reported a 57% increase in Union Election Petitions filed during the first six months of fiscal year 2021.

Support for Union dipped below the 50% mark once, in 2009 and now sits at a level last seen nearly 60 years ago.

Democrats supported unions by 89% and Republicans were at 58%, while Independents were at 68%.

“Better pay and benefits” was the top reason (65%) unionists gave for joining up, followed by worker rights and representation (57%), job security (42%), better pensions and retirement benefits (34%), a better work environment (25%), fairness and equality at work (23%) and health and safety protections (9%).

“After a year of victorious strikes, record union election filings and relentless efforts from corporate billionaires to silence workers, today comes as no surprise. Working people recognize the need for a collective voice—and it shows. We are stronger in a union,” Shuler declared.

When we fight together, we WIN together!